Categorical perception is perhaps most easily understood from the case of colour.
Let me start with something quite basic. Here are three patches of colour. The patches are all different colours, but the two leftmost are both the same colour---they are both blue. This sounds contradictory but isn't. In one case we're talking about the particular colours of things; in the other case we're talking about colour category.
To claim that there is categorical perception is, very roughly and to a first approximation, to claim that perceptual processes are concerned not only with the particular colours of things but also with categories of colour like blue and red.
This is not a definition, only a very rough starting point.
We can go slightly further with an operational definition of categorical perception ...
[For later: colour is doubly relevant because there's been serious debate about whether it's possible to perceive categorical colour properties despite copious verbal reports. This case shows how evidence can bear on questions about phenomenology, although I won’t be talking about that here (probably).]

observe between- vs within-category differences

exclude non-cognitive explanations for the differences

greater discrimination between than within catgeories indicated that the inital system of categories may be having some influence on whatever underpins the responses.
Do any perceptual processes in humans discriminate stimuli according to the expressions of emotion they involve? That is, do humans have \emph{categorical perception} of expressions of emotion? 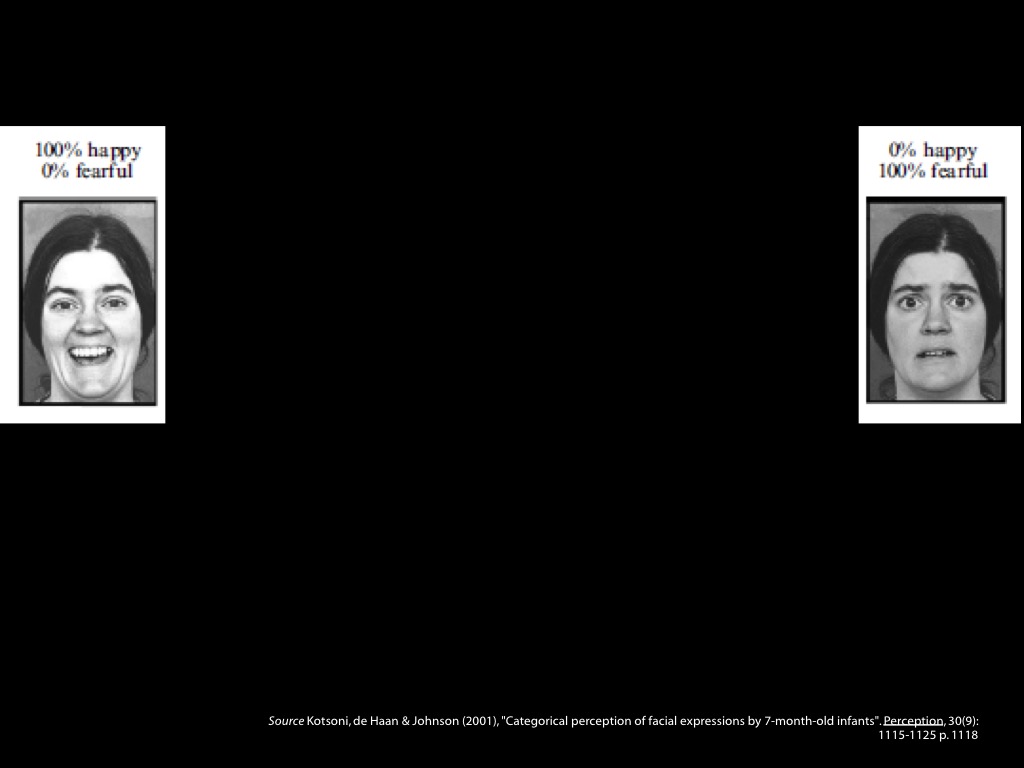 Assume that we as theorists have a system which allows us to categorise static pictures of faces and other stimuli according to which emotion we think they are expressing: some faces are happy, others fearful, and so on. From five months of age, or possibly much earlier \citep{field:1982_discrimination}, through to adulthood, humans are better at distinguishing faces when they differ with respect to these categories than when they do not \citep{Etcoff:1992zd,Gelder:1997bf,Bornstein:2003vq,Kotsoni:2001ph,cheal:2011_categorical,hoonhorst:2011_categoricala}. 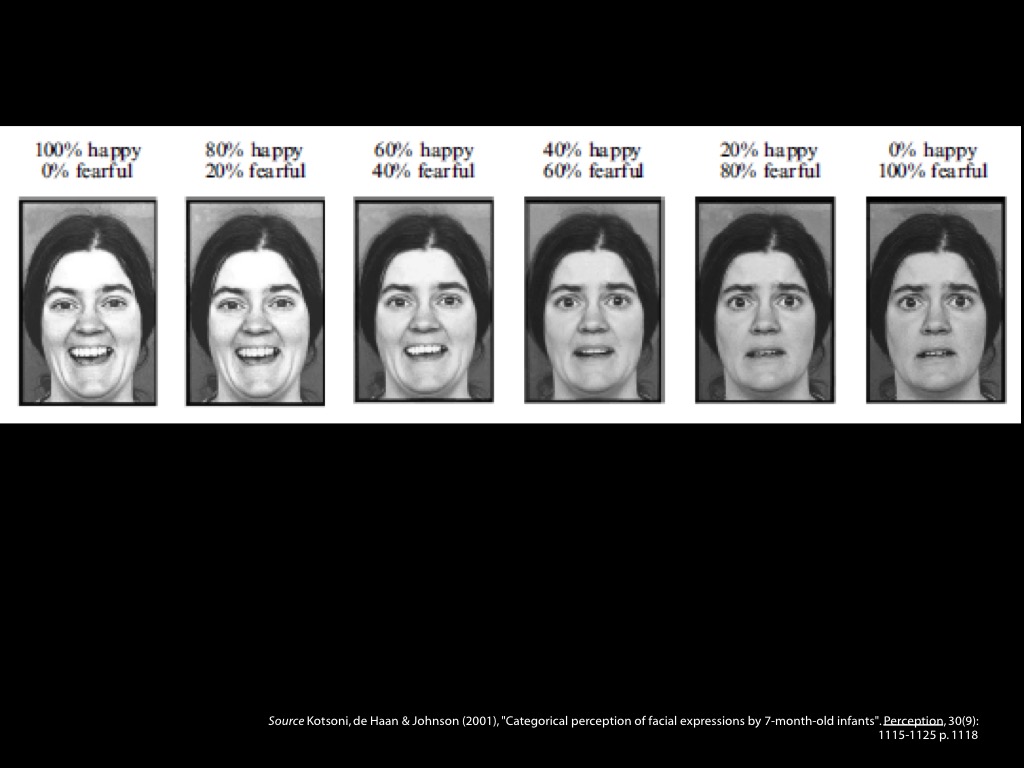 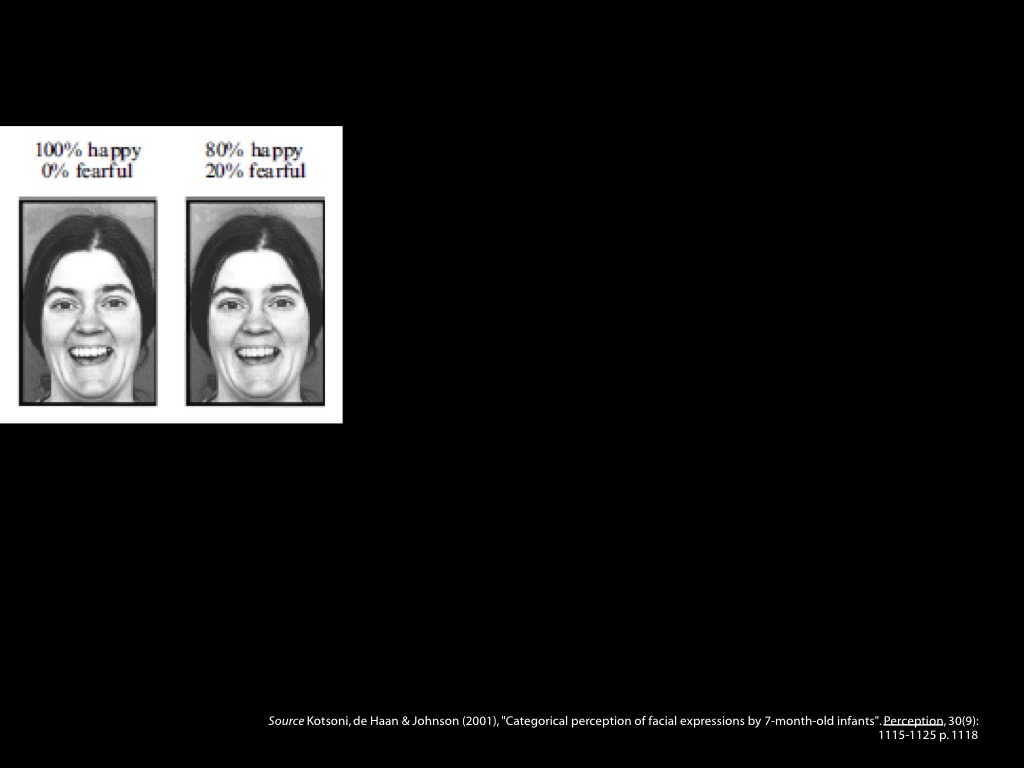 Most neighbouring pairs of face pictures would be relatively hard to distinguish, 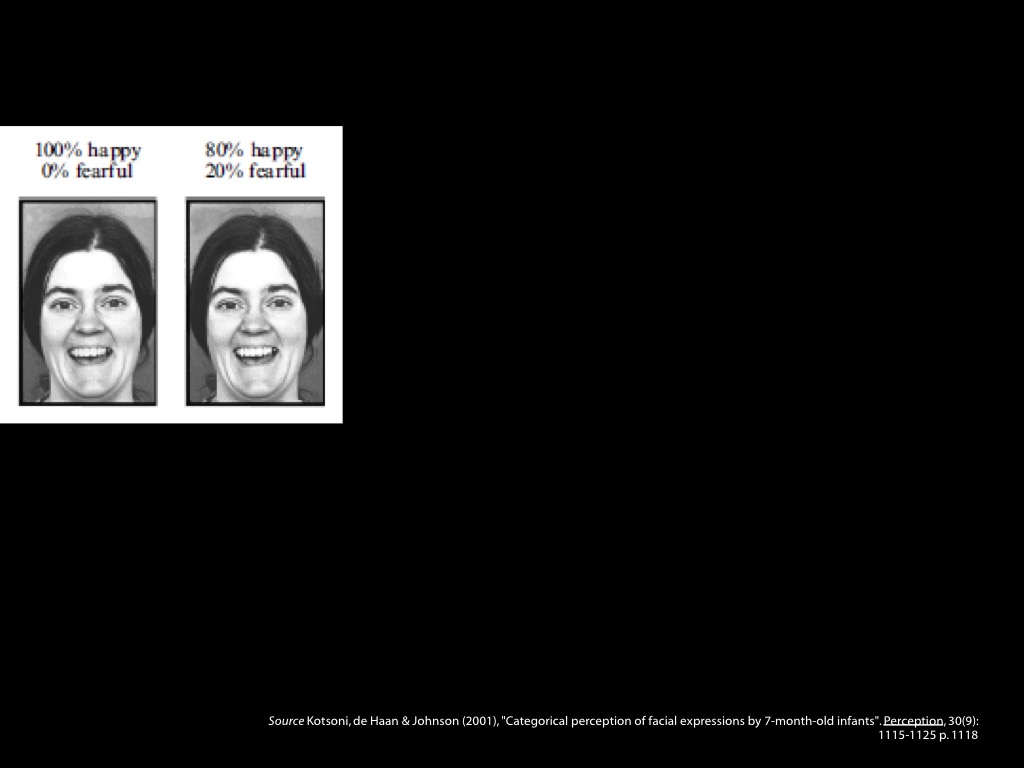 especially if they were not presented side-by-side. 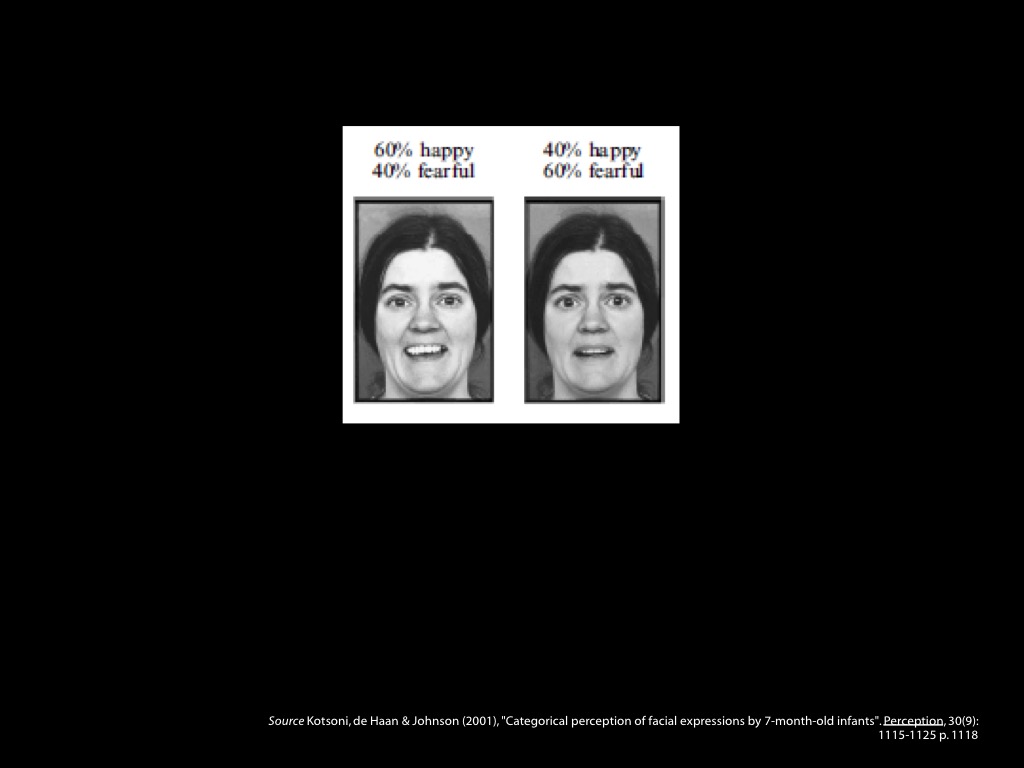 But most people find one pair of neighbouring face pictures relatively easy to distinguish---you may notice this yourself. 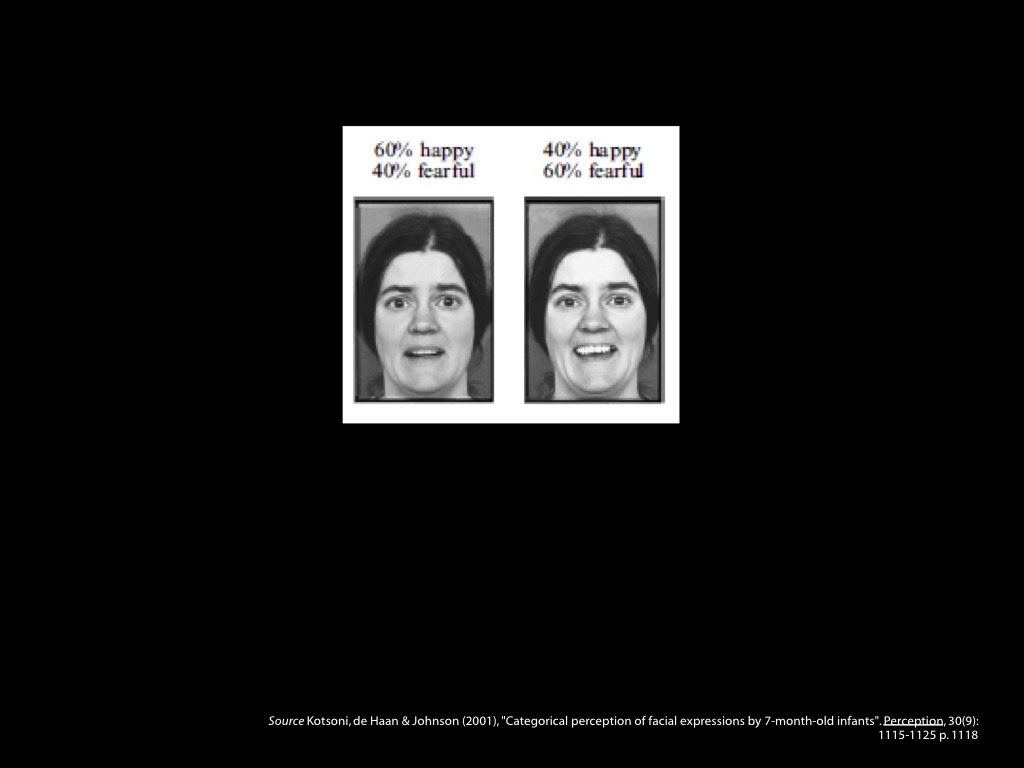 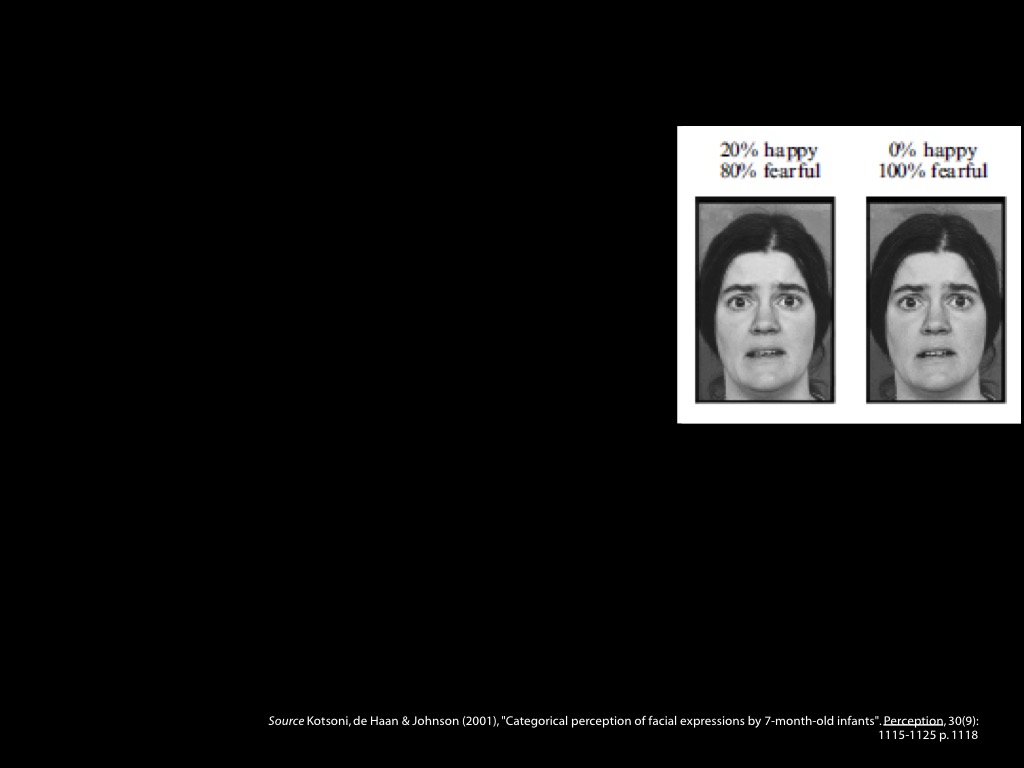 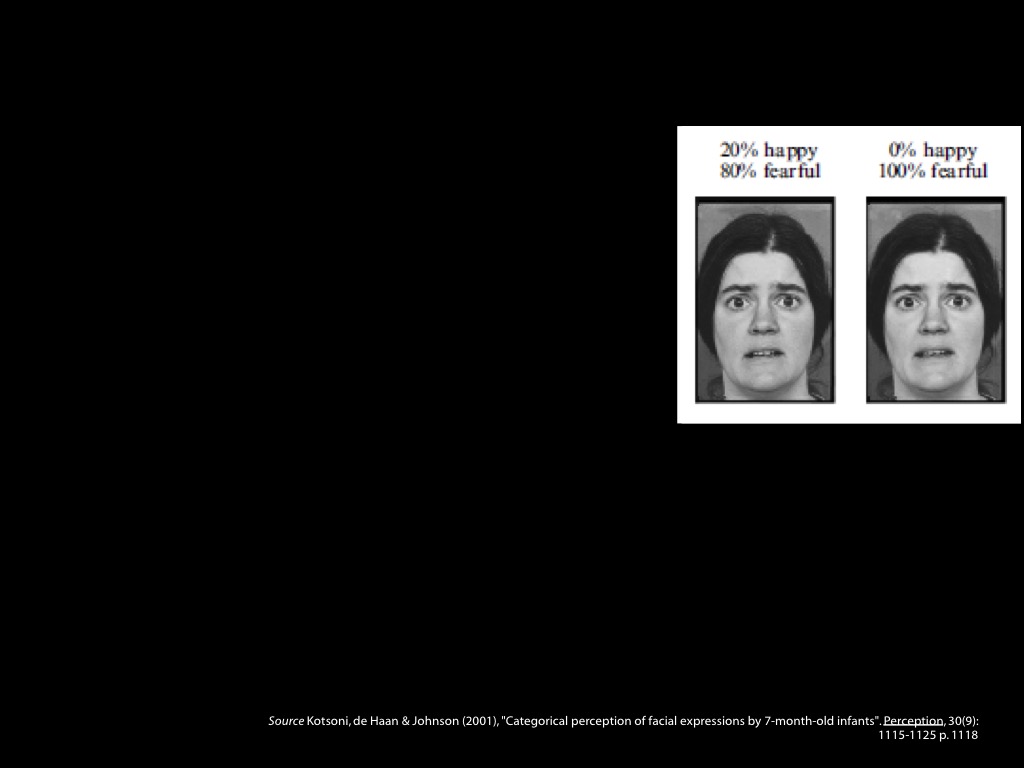 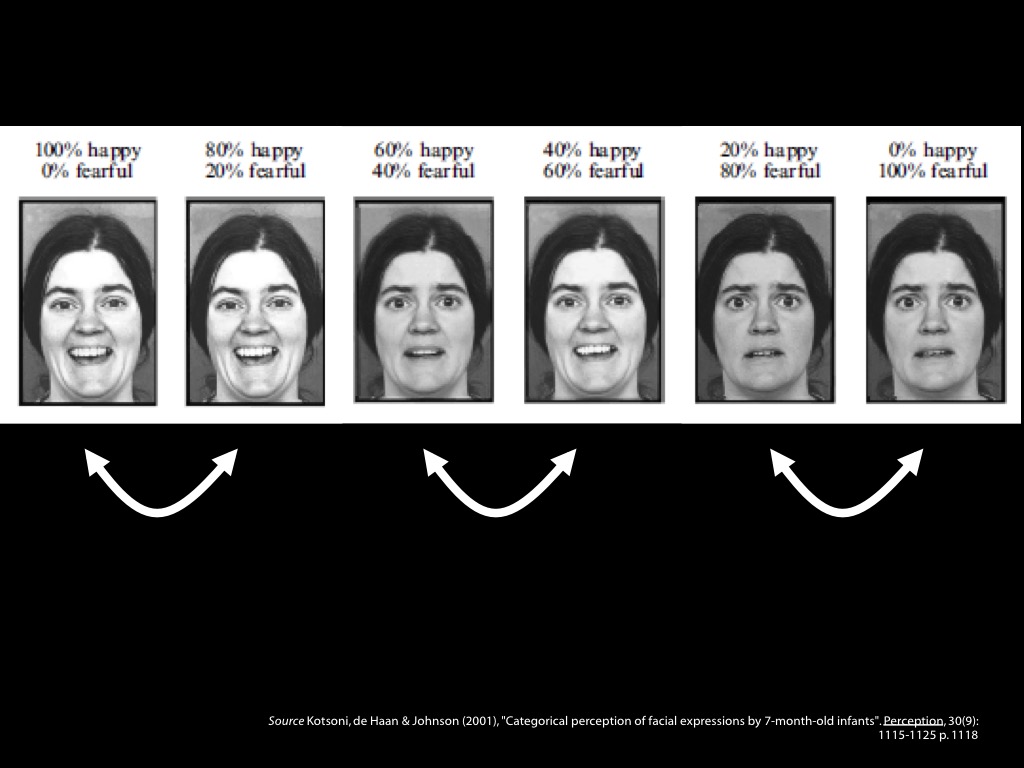 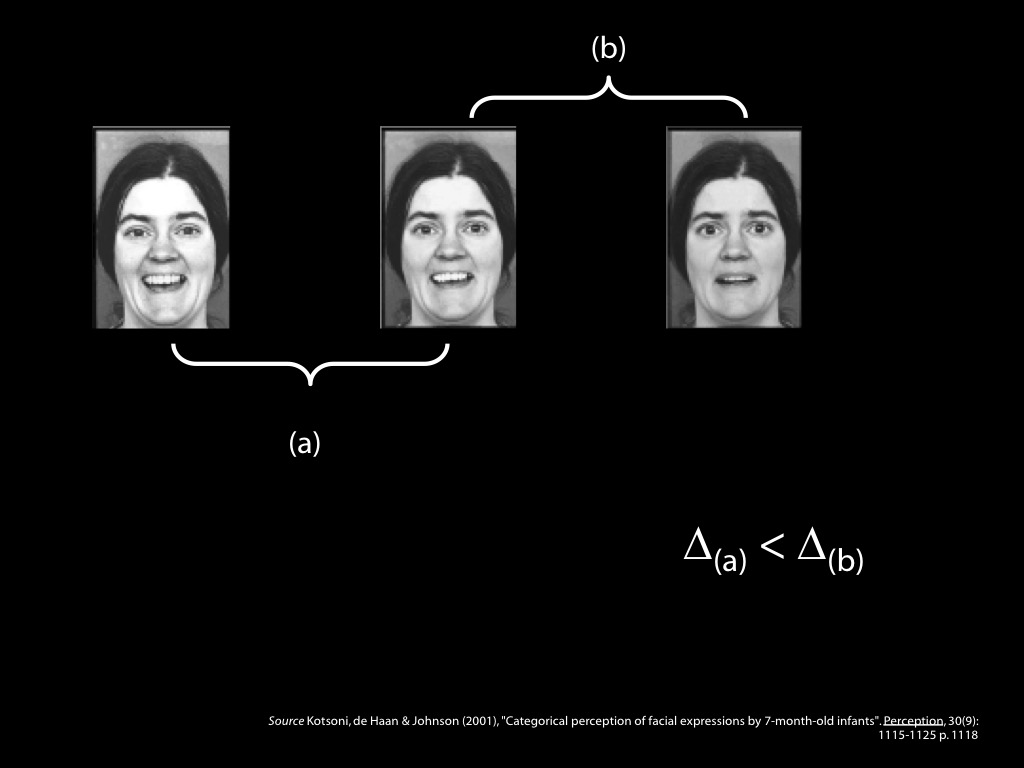 What underlies these patterns of discrimination? Several possibilities that would render them uninteresting for our purposes can be ruled out. The patterns of discrimination do not appear to be an artefact of linguistic labels (\citealp{sauter:2011_categorical}; see also \citealp{laukka:2005_categorical}, p.\ 291),% % \footnote{ Puzzlingly, experiments by \citet{fugate:2010_reading} using photos of chimpanzee faces with human subjects are sometimes cited as evidence that categorical perception of expressions of emotion depends on, or can be modulated by, the use of verbal labels for stimuli (e.g.\ \citealp[p.\ 288]{barrett:2011_context}; \citealp[p.\ 315]{gendron:2012_emotion}). Caution is needed in interpreting these findings given that there may be differences in the ways humans process human and chimpanzee faces. In fact, what \citeauthor{fugate:2010_reading}'s findings show may be simply that `human viewers do not show [categorical perception] for the chimpanzee facial configurations used in their study' \citep[p.\ 1482]{sauter:2011_categorical}. } % nor of the particular choices subjects in these experiments are presented with \citep{bimler:2001_categorical,fujimura:2011_categorical}. Nor are the patterns of discrimination due to narrowly visual features of the stimuli used \citep{sato:2009_detection}. We can be confident, then, that the patterns of discrimination probably reflect one or more processes which categorises stimuli by expression of emotion.
Don't have details, this is just to stress it's early (around 200ms) and plausibly automatic. 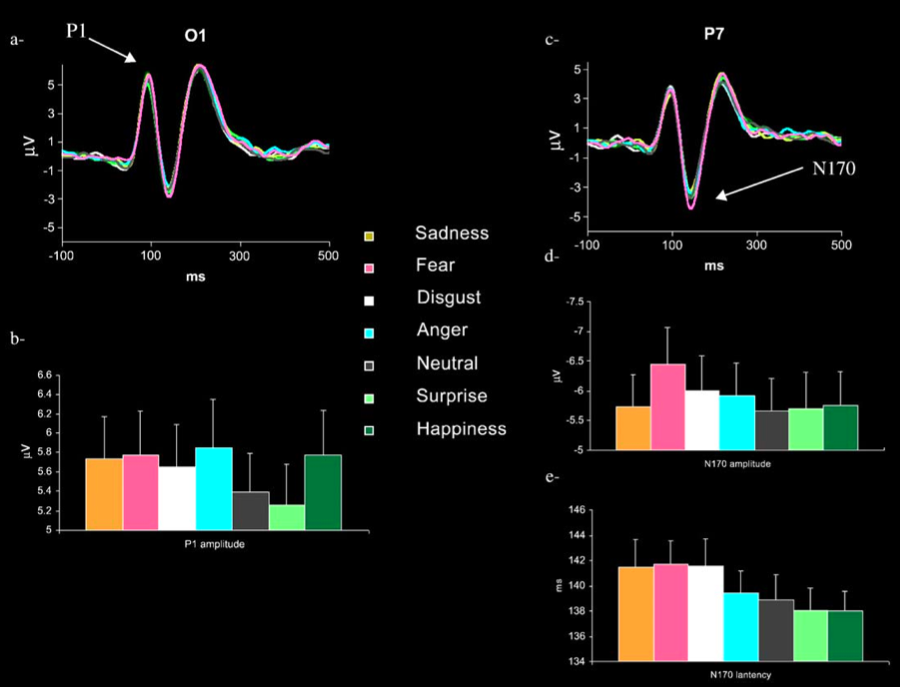 At least some of the processes underpinning categorical perception of facial expressions of emotion are rapid (occurring within roughly 200 milliseconds of a stimulus' appearance), pre-attentive \citep{vuilleumier:2001_emotional} and automatic in the sense that whether they occur is to a significant degree independent of subjects' tasks and motivations \citep{batty:2003_early}.%

But are any of the processes that categorise stimuli by expression of emotion perceptual? %That is, are the observed abilities to discriminate expressions of emotion ever based on perceptual processes? Answering this question is complicated by the fact that many parts of the brain are involved \citep{adolphs:2002_recognizing,vuilleumier:2007_distributed}. There is evidence that both the amygdala \citep{harris:2012_morphing,harris:2014_dynamic} and also some cortical structures \citep{batty:2003_early} respond categorically to expressions of emotion; and that intervening in the operations of the somatosensory cortex can impair categorisation (\citealp{pitcher:2008_transcranial}; see also \citealp{banissy:2011_superior}). To my knowledge, so far it is only for happy and fearful stimuli that we have direct evidence from both neurophysiological \citep{Campanella:2002aa} and behavioural measures \citep{williams:2005_looka} of categorisation occurring in perceptual processing. So while the evidence is not conclusive, there is converging evidence that some perceptual processes categorise stimuli including faces by expression of emotion. Humans may have categorical perception not only for speech, colour, orientation and other properties but also for expressions of emotion.
What do I mean by perceptual here? Distinguish perceptual process vs. perceptual experience. I suppose that perceptual experience of emotions or their expressions requires that there are perceptual processes which carry information about them. (Note that not everyone would agree with this; many appear to think that claims about perceptual experience float free of claims about the psychology and neurophysiology of perception.)
What exactly is the evidence? (Never trust a philosopher on science.)
An ERP is an event-related potential; it is a recognisable electorophysiological signal, measured by, for instance, EEG, that is associated with a particular neurological process. For instance, there are ERPs associated with aspects of inhibitory control.
‘The higher amplitude of the N170/VPP for the second face of between pairs as compared to within and same pairs can be understood when that subjects are confronted with two faces (in between pairs) perceived as different expressions (happiness and fear) by the perceptual system.’

‘The higher amplitude of the N170/VPP for the second face of between pairs as compared to within and same pairs can be understood [... thus:]subjects are confronted with two faces (in between pairs) perceived as different expressions (happiness and fear) by the perceptual system.’

‘The N170/VPP is considered as the process indexing the structural analysis of facial information in order to obtain a configurational face representation (Jeffreys, 1996)’

\citep[p.~219]{Campanella:2002aa}
N170 / VPP is a marker of face processing generally; so if you think that is perceptual, then the presence of the N170/VPP here gives you a reason to think that categorical perception of expressions of emotion is perceptual too.

Earlier I asked, what evidence could bear on the perceptual hypothesis? Now we have a partial answer.

‘We sometimes see aspects of each others’ mental lives, and thereby come to have non-inferential knowledge of them.’

\citet[p.\ 573]{mcneill:2012_embodiment}: ‘We sometimes {see} aspects of each others’ mental lives, and thereby come to have non-inferential knowledge of them.’

1. The objects of categorical perception, ‘expressions of emotion’, are facial expressions.

2. The things we perceive in virtue of categorical perception are not emotions.

Some have tried to resist the conclusion by arguing that expressions are parts of emotions. This raises some complex issues that I won’t delve into here, since Will McNeil has already given an excellent argument on this topic in a paper mentioned on your handout.
Can the argument be blocked by claming that expressions are parts of emotions? See \citet{mcneill:2012_embodiment}.
Instead I want to consider the first step of the argument. Is this true? Actually we haven’t considered this carefully at all. For a start, we are talking about expressions of emotion but we haven’t yet paused to consider what they are. More pressingly, we wse have to ask, What are the objects of categorical perception? That is, What Are the Perceptual Processes Supposed to Categorise?