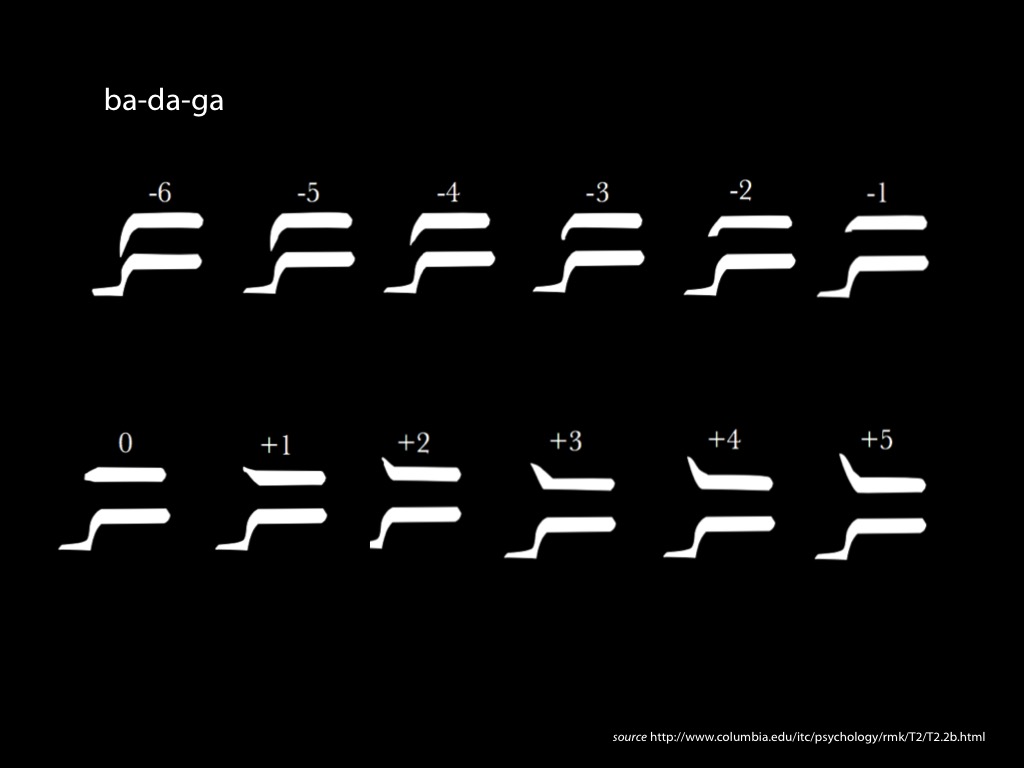 Consider this following representation of twelve sounds. Each sound differs from its neighbours by the same amount as any other sound, at least when difference is measured by frequency. Most people would not be able to discriminate two adjacent sounds ... 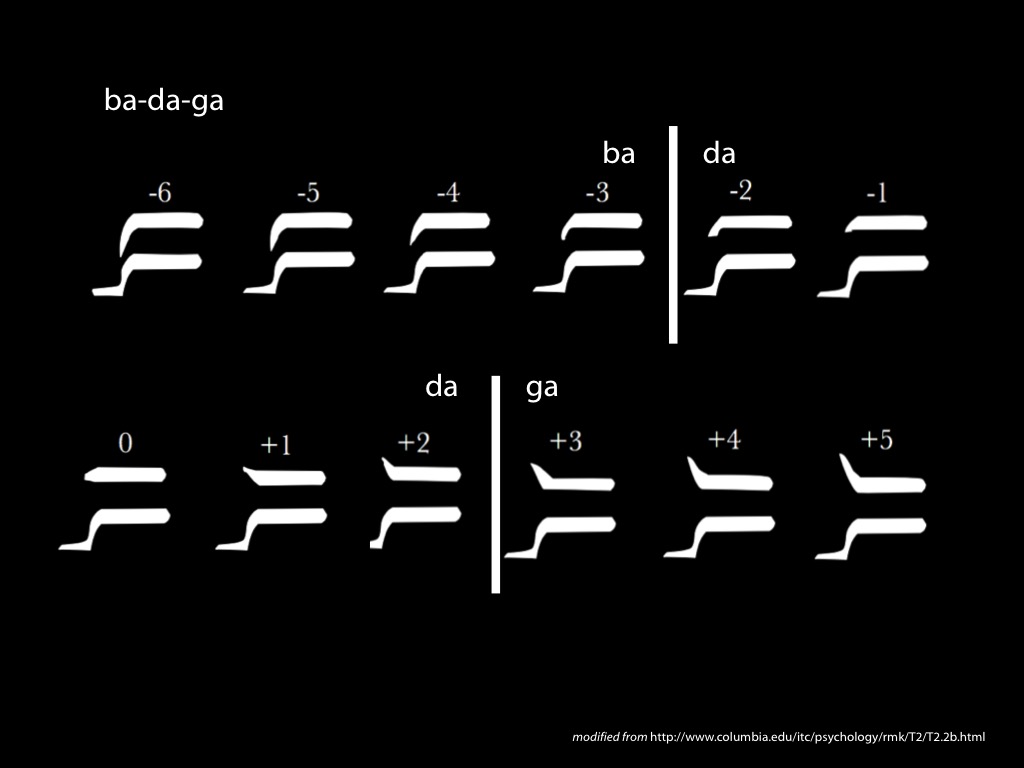 except for two special cases (one around -3 to -1 and one around +1 to +3) where the discrimination is easier; here people hear the sound change from da to ga or from ga to ba. 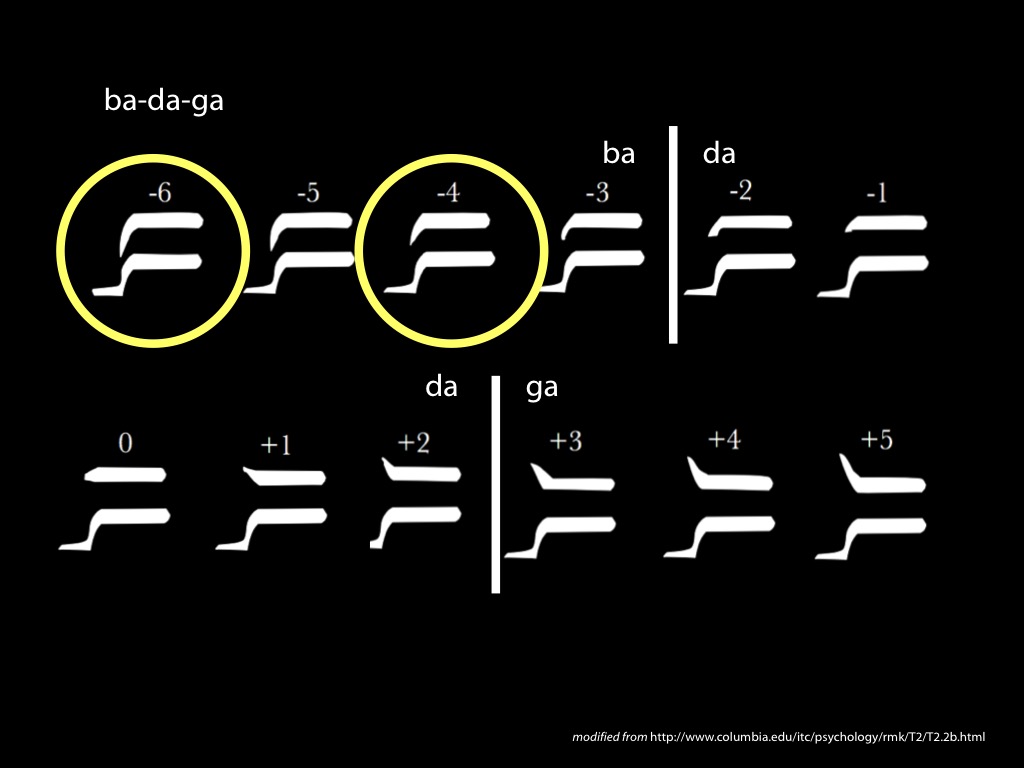 So although these sounds are, from an acoustic point of view, no more different than ... 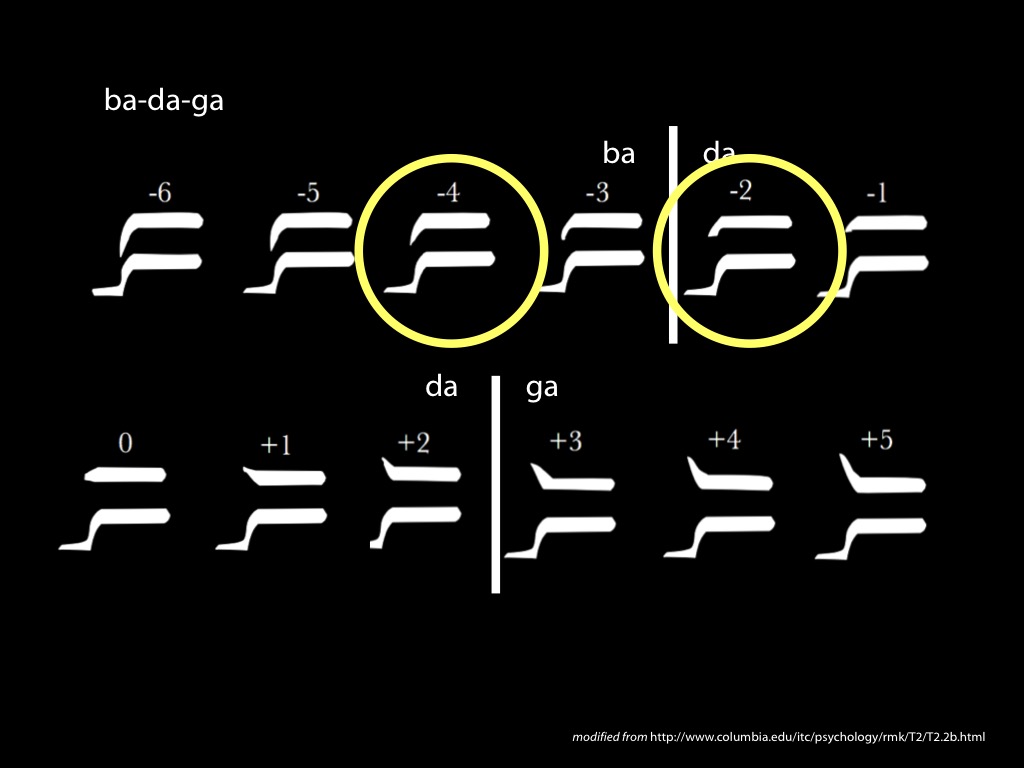 What determines where the category boundaries fall?

It is perhaps tempting to think that categorical perception of speech is just a matter of categorising sounds. But this is not straightforward.
For one thing, the existence of these category boundaries is specific to speech perception as opposed to auditory perception generally. When special tricks are used to make subjects perceive a stimulus first as speech and then as non-speech, the locations of boundaries differ between the two types of perception \citep[p.~20--1]{Liberman:1985bn}. 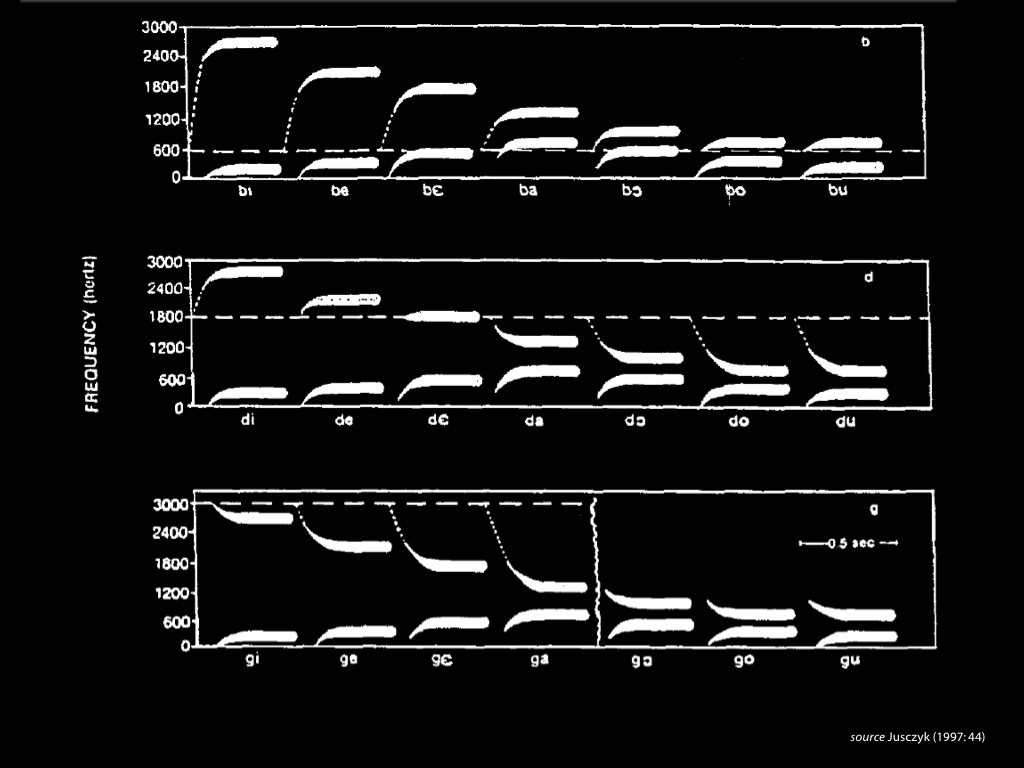 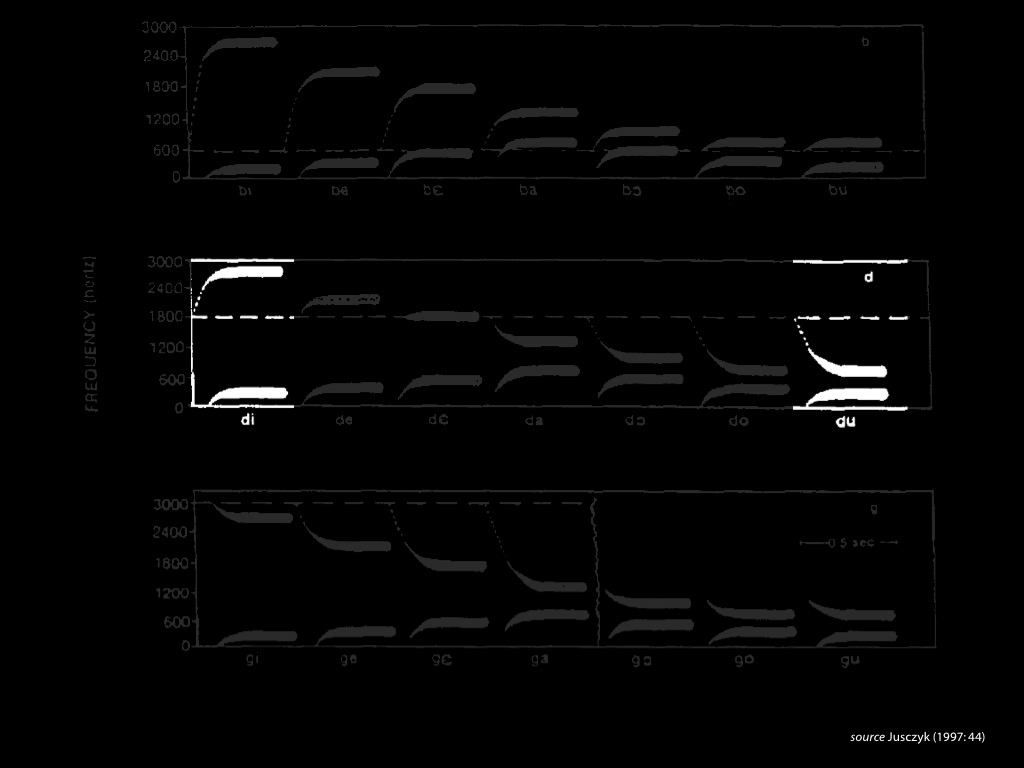 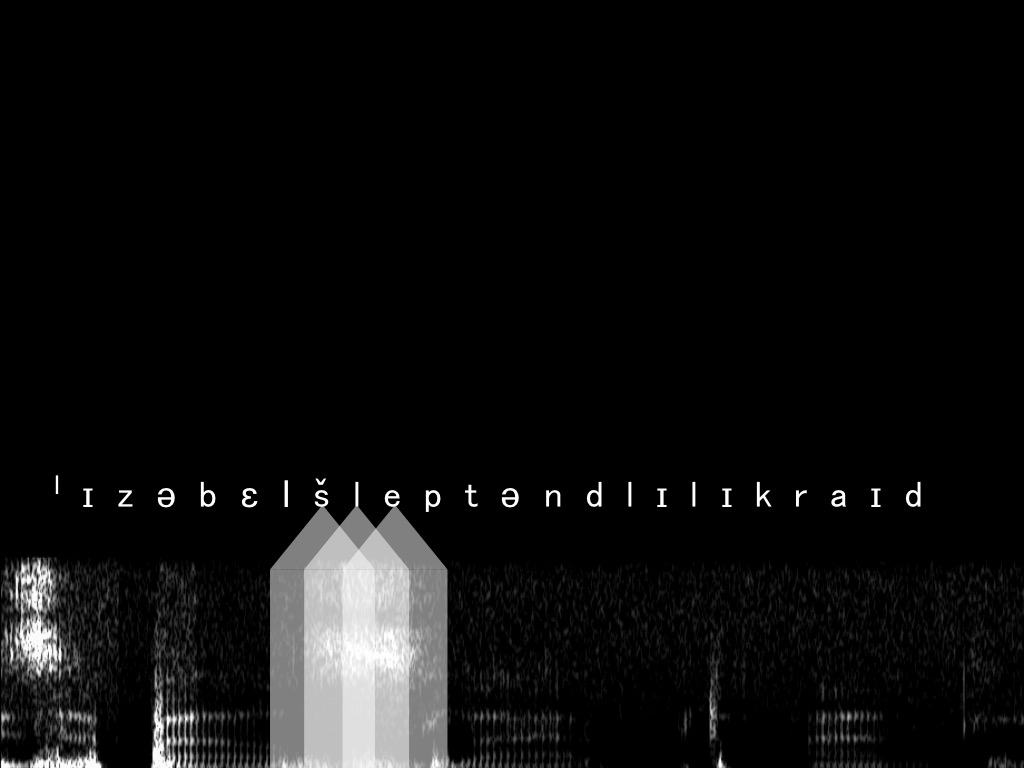 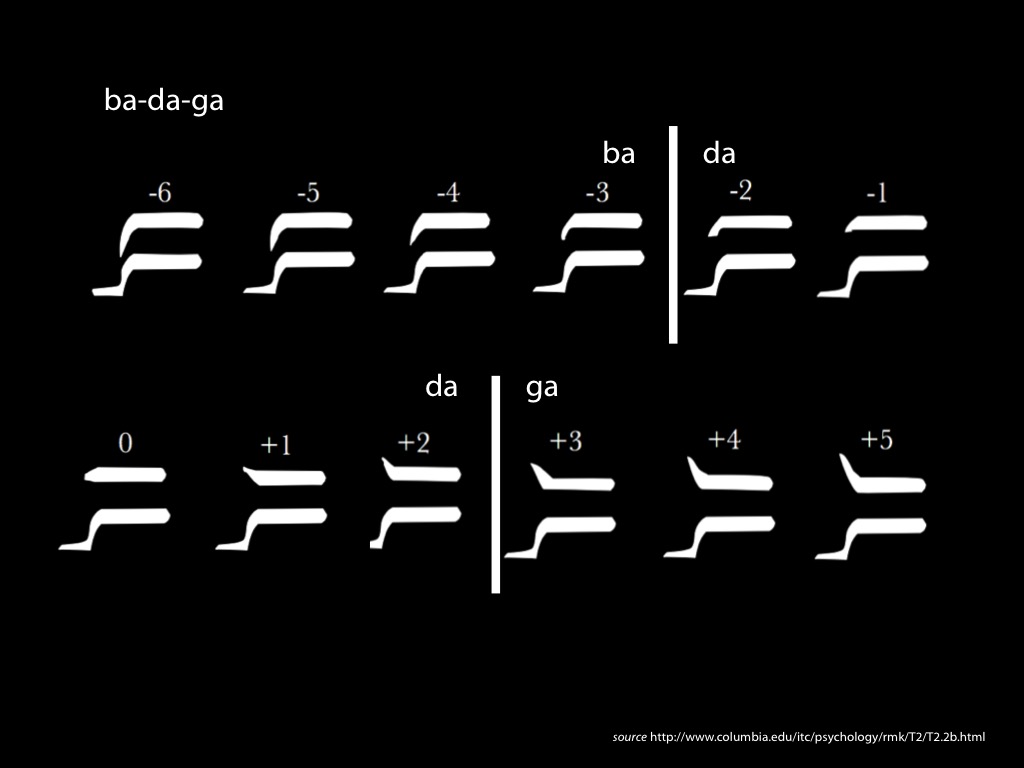 the location of the category boundaries changes depending on contextual factors such as the speaker’s dialect or the rate at which the speaker talks ; both factors dramatically affect which sounds are produced. This means that between two different contexts, different stimuli may result in the same perceptions and the same stimulus may result in different perceptions. 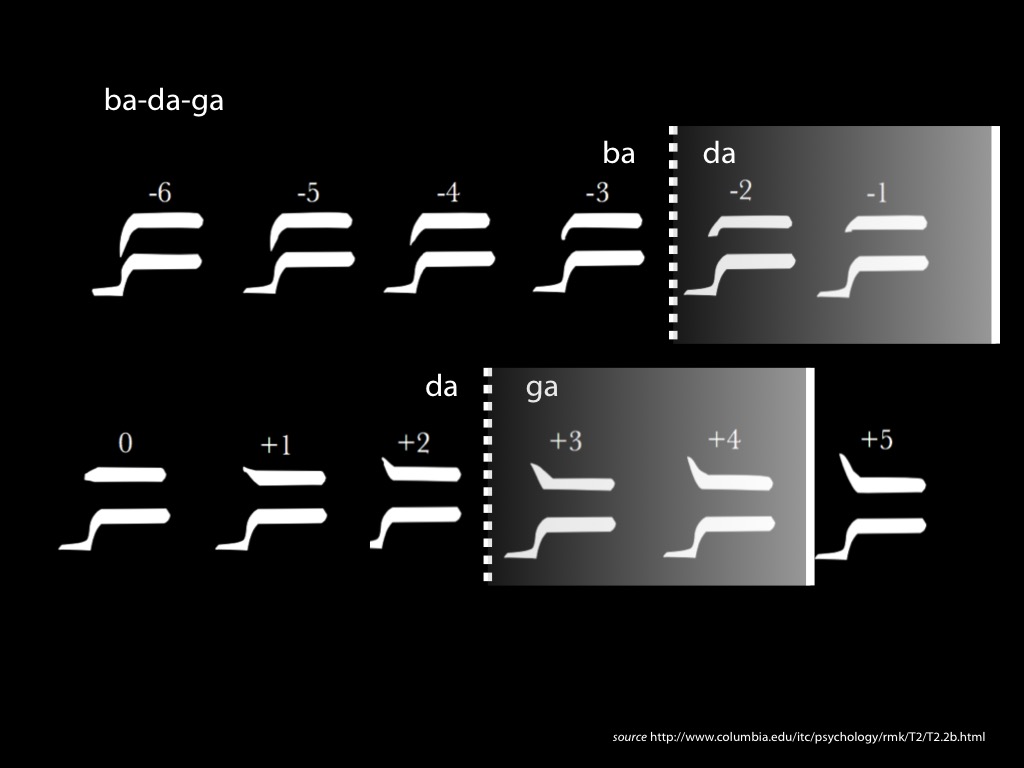 (1) There are category boundaries … .

(2) … which correspond to phonic gestures.

What is a phonic gesture?
In speaking we produce an overlapping sequence of articulatory gestures, which are motor actions involving coordinated movements of the lips, tongue, velum and larynx. These gestures are the units in terms of which we plan utterances (Browman and Goldstein 1992; Goldstein, Fowler, et al. 2003).

(4) The best explanation of (1) and (2) involves the claim that the objects of speech perception are phonic gestures.

This illustrates how we might establish claims about the objects of perception
But why accept that the best explanation of (1) and (2) involves this claim? Part of the reason concerns relations between speech production and speech perception ...

Good, but this stops short of showing that the motor activations actually faciliatate speech recognition ... 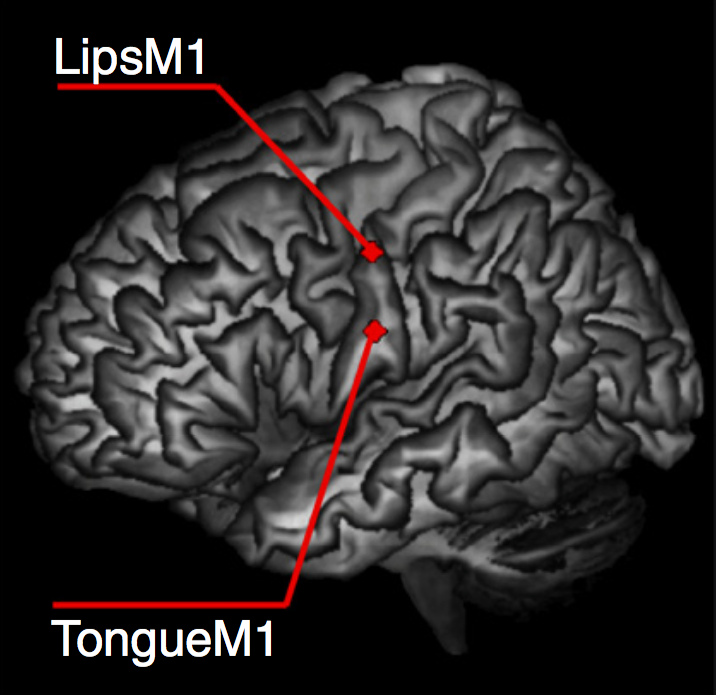 ‘Double TMS pulses were applied just prior to stimuli presentation to selectively prime the cortical activity specifically in the lip (LipM1) or tongue (TongueM1) area’ \citep[p.~381]{dausilio:2009_motor}
‘We hypothesized that focal stimulation would facilitate the perception of the concordant phonemes ([d] and [t] with TMS to TongueM1), but that there would be inhibition of perception of the discordant items ([b] and [p] in this case). Behavioral effects were measured via reaction times (RTs) and error rates.’ \citep[p.~382]{dausilio:2009_motor} 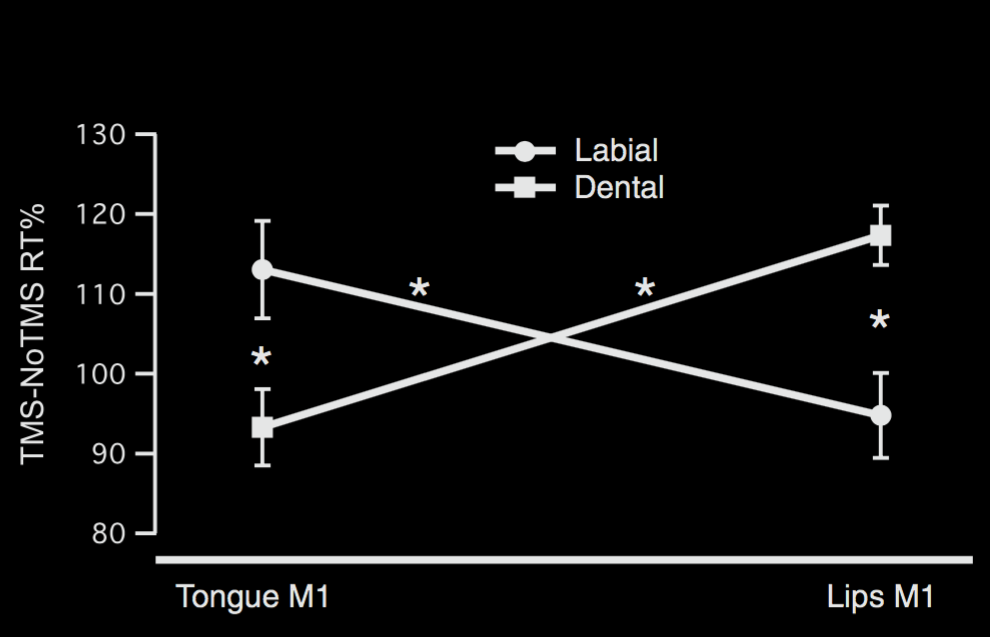 ‘Effect of TMS on RTs show a double dissociation between stimulation site (TongueM1 and LipM1) and discrimination performance between class of stimuli (dental and labial). The y axis represents the amount of RT change induced by the TMS stimulation. Bars depict SEM. Asterisks indicate significance (p < 0.05) at the post-hoc (Newman-Keuls) comparison.’ \citep{dausilio:2009_motor}

(1) There are category boundaries … .

(2) … which correspond to phonic gestures.

(4) The best explanation of (1) and (2) involves the claim that the objects of speech perception are phonic gestures.